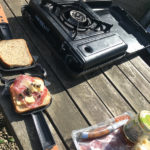 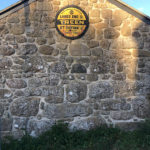 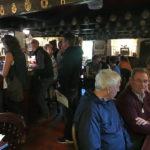 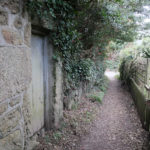 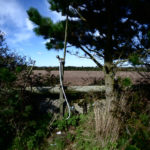 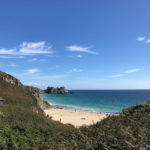 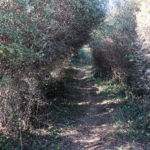 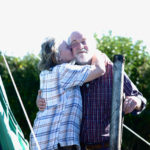 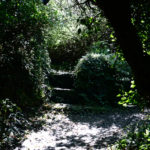 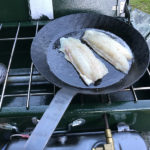 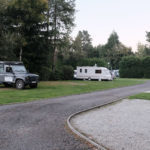 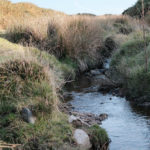 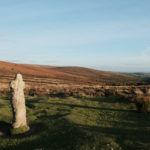 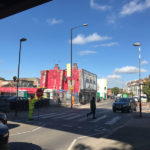 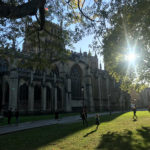 Someone told me that the Eden project is worth seeing. A kind of park under domes in a former quarry. Only one night on a very expensive campsite, which was not even very nice. But with a pub about a mile away. My cold is still not gone and something was just fine, to take plenty of fluid to me again.

I was in the garden all day. That seemed like a Disney land for a green man in the beginning. I can not do much with the birdsong of loudspeakers. Even people who stare as if spellbound on a “Now I press grapes out” presentation, I find strange. In the end I really liked it and it was certainly worth the £ 27 entry fee. In the evening I stayed there in the youth hostel. Actually a container settlement, very functional, but also imaginative made.

Beautiful weather in Dartmoor, a mix of forest and heathland. I follow the campsite icon on my map – at the end of a thin white street. Farm Camping! Because of the hedges and walls for campers almost unattainable. Very well! I make the place clear, I’m alone, but then I drive away to take some pictures in the evening mood. I encounter highland cattle, wild horses and black and white cows with a strange, fluffy coat. When I return to the square, I notice two tents on the other side of the stream. The next morning I will provide their residents with my fine coffee and chat quite nicely. Two brothers from London, who have hung after a few days out of work.

I stay in More all day, but in the evening I go to another farm. In addition to a parking space, the farmer’s wife also offers eggs. Great, I’d like two of that. Chicken or duck? I had not expected this question. I’ll take one each. The next morning there was a delicious duck fried egg.

In the evening, I read on Wikipedia that on a hill nearby, the ten, more precisely eleven commandments have been carved in Steinquader. Probably as an expression of the joy of the result of a vote sometime in the 17th century, the ten commandments should not be replaced by two others.

This was a nice morning walk with a magnificent view from the XX Baecon. Someone had told me that Exceter was worth seeing. Just 20 minutes away, good for a detour. Well, it may have something special, but I did not find that. I walked around a bit and went to a shop, better a hall, where clothes were sold at the kilo price. I would like to photograph some of the people. There is still time for Wales. So on to the north! Coming from England to South Wales is like going from Flanders to Wallonia in Belgium. Everything a little less tidy, but also less constrained. I made it then just before dark to a farm camping with very questionable sanitary facilities. The six euros for the night it was still worth it, because I have the next morning still good tips for a little hike along a creek with some waterfalls get. Unfortunately, the dryness of the last few months is noticeable here as well – they were rather tricky than waterfalls. Nevertheless, a nice little hike, there were also some pretty pictures.

The landscape from the Seven Sisters towards Breakon Beacons is more than spectacular. Somehow reminiscent of the Midwestern United States. Of course, not so spacious, but on that day with the picturesque sky, it was already very nice. Target was a campsite icon just below the Breakon Bacons.

I’m really not very picky about campsites, but this farm was for me in no way trustworthy. But there is still a camping symbol on the map. The street becomes smaller and smaller and ends in a kind of parking lot meadow. It is fantastically beautiful here. There are no signs, no information. I ask two others if they can stay here, but they do not know. So I’ll stay first. At about 7:00 in the evening, the farmer comes with a quad and a dog and would like to have four pounds for the overnight stay. This is more than worth it to me. One of the most beautiful places ever. Meadow (with horse and foal), old oak trees, a river meandering through the grounds. Here I will stay two nights. On the second evening, two more hikers, who set up their tent at the bottom of the stream, are crossing. We sit a bit by the fire until it starts to rain.

The date of the exhibition opening is getting closer and closer. I did not have much experience with parking in Bristol. Wild would be o. K. for one night, but otherwise there is no good alternative. There is a RV park that is booked up months in advance and costs about as much as a cheap Airbnb room.

So then: book a room. The description says: Parking in the driveway. Ideally, with all the stuff and Rita’s work I’m going to have in the Landy. The room is reasonably priced, the neighborhood in the east of the city right – let’s say: colorful – but not in any way that I would park my car on the street with a clear conscience. Rita’s rejected work at the gallery picked up and arrived at the property, it turns out that it is street parking. Not in the driveway or in front of the house, but somewhere, where a place can be found. I’m not so comfortable. Luckily there is the internet and a solution: Airbnb for cars. I book for £ 18 a place in a driveway, £ 8 car-minutes away with Uber.

The room is o. K., Not much larger than my Land Rover and after I arrived, I am now also quite hungry and tired. I am recommended an Indian restaurant just around the corner. Well, what’s being praised as lamb, cooked so tenderly that it falls off the bone, turns out to be a tight-knit, sinewy something, maybe just to use for goulash. Fortunately, in the rich sauce were only three, four of them. Well, Google says this restaurant is among the top ten Bristol …

The day after tomorrow is the Varnishing Day. Time to explore Bristol further. But first of all cozy dawdle and take advantage of the fact that there is fast internet here. Some websites and my phone need updates.

By public transport to the city. There is a day pass. Is it valid for 24 hours? Yes! That’s probably not true, as I had to learn the next morning. So I got myself a single ticket, with which you should not change. Claus and public transport are somehow incompatible … I do not quite understand why a bus can only have a single door to get in and out, so you can not change with a ticket and with what serenity and slowness the Ein and get off.

Varnishing Day: on to the gallery! I wonder how and where my art is placed! The building is already impressive. The premises fantastic. Show me my invitation, take a glass of Prosecco at the entrance and go into the hall. Nothing to see from my work. A mistake? I’m going out again. There it stands, quite prominently. Right in the entrance, actually before the exhibition. I’m not sure what to think about it. Unfortunately, one has also lost or forgotten the sign. And promises to fix that until the unofficial opening tomorrow. The exhibition itself is great, I admire the curator! The works are very different, but thematically beautifully presented. And of a really surprising variety.

Bristol is too loud for me. I was fooling around, was still in a pub. I sat at the table, not even at the bar. I have an app that allows you to measure a sound pressure. 90 db at the table is just too loud for me. Bristol is a young city. Many students, but somehow I felt that many people here are not alone, but lonely, strange.

The day of the exhibition opening has arrived! I got lost and arrived half an hour later.

What a huge rush. The exhibition is great! A wonderful mix of different art styles – where you have managed to place the objects really beautiful. A great curator.

The next day then on relatively direct way back to Belgium. The ferry I have booked for 20.00 clock, so enough time. I pack

Any cookies that may not be particularly necessary for the website to function and is used specifically to collect user personal data via analytics, ads, other embedded contents are termed as non-necessary cookies.